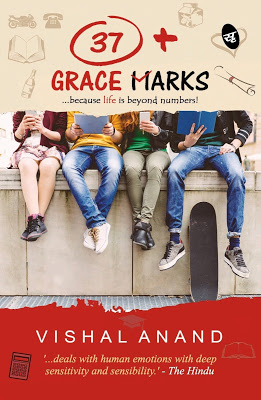 “The Illiterate of the 21st century won’t be those who can’t read and write but those who can’t learn, unlearn and relearn.” The traditional idea of being educated is to have glorious scores on the mark sheets, a good paying 9-5 job, and an ideal money-saving strategy. But with time, some perspectives have changed too. Now, people believe more in the fact that education is not learning of facts and figures but the training of the mind to think.

“37+ Grace Marks” touches the same issue and narrates the story of Viraj, an engineering student, and his friends. The novella is built around one major idea that the students bear the brunt of college rules. Be it attendance or dreary shower by the teachers, the students are the ones who come apart at the seams. The novel explores the precarious personality of Viraj, who is a round character that evolves throughout the story. Once jaunty and carefree, Viraj’s psyche is altered when Nimisha enters his life. Rejected in love (twice), his desperate attempts to balance his life with good marks also fails. Left with no other option, he decides to call it quits.

Viraj’s wobbly personality is not very amiable. There are certain missing links in the story; some chapters have not been linked to each other properly. Another point that I would like to highlight is the biased perception towards determined achievers. The plot might seem relatable to most of the students who are either still studying or have completed college. But for the ones who are (were) diligent achievers, the emotions seem distant.

Coming to the technicalities of the book, the cover of the book is apt; the title, however, fails to impress. A subtler title would have been better. I was rather peeved at the frivolous mistakes (like on page179 when the doctor acknowledges Nimisha because her father was his friend, the line that quotes the same is: “His father and I were college friends.”). The incorrect use of pronoun here irked me a lot. Other than this, the casual or I would rather say the colloquial use of language is something I disliked (for example I removed myself from the front of the door).

Other than this, the previews were for the author and not the story. Generally, it is the other way around. With a baffling blurb, the story failed to strike the right chord. Amidst very high claims, the plot has nothing new to offer. The character of Nimisha could have been given more importance and this could have been used to make the ending a little unpredictable.

Best wishes to the author.