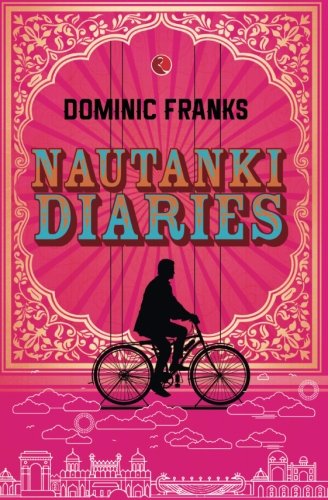 If you think adventure is dangerous, try routine- it’s lethal. Dominic Franks, 38, believes in exploiting the limits of human mind and strength. He came into the news after his successful expedition from Bangalore to New Delhi on a bicycle. Brimming with moxie and the required fortitude, Franks set out on this expedition on his Hercules DTS (better known as Nautanki) and spent 22 days on the road.

‘Nautanki Diaries’ is a conflux of travelogue and experience. With strong and eloquent narrative, the book proves that the author is a man of acute perspicacity. A perfect companion, Nautanki, passes the muster. By the time I reached the beginning of Franks’ journey, I had already started believing that there were two protagonists of the book- Franks and Nautanki. With such apt personification and unambiguous description of the hypnagogic surroundings, this book aces the test.

This travelogue lacks superfluous soliloquy and mundane descriptive paragraphs and that makes it more intriguing. Instead, it offers an insight into the common human foibles. When Franks learnt that his mentor (ideal), Shikhaari, had completed a similar expedition in 1982, he made up his mind to be a witness to the 2010 Commonwealth Games after reaching Delhi successfully on his bicycle and he did it!

With an interesting cover and a precise blurb, Nautanki Diaries is offbeat yet amazingly impressive. The author’s prowess lies in narrating his experiences in form of words. Overall, a good read and an interesting literary feat!