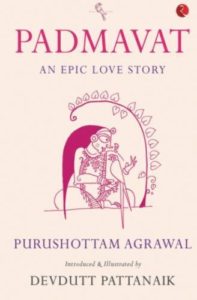 Isn’t it strange how love can be the happiest thing ever but can also cause immense pain? And yet, everyone keeps searching for it! The recent agitation following the release of Padmavat (i) by Sanjay Leela Bhansali evoked the interest of several to dig deeper and know more about the history of Queen Padmavati and Alauddin Khilji. Apparently, the portrayal of Johar as the central theme of the movie cut the Rajputs to the quick and wounded their beliefs. But then, on a brighter note, it also added fuel to the flames burning within the minds of the writers who cherry pick any such opportunity that gives them a concrete plot and relatable characters.

Offered with a subtle cover and plenty of illustrations as the sidekick, this book is like a guide. Do you remember the ICSE guides that we all used to buy to understand the poetry better? Yes, this book serves that purpose. One thing that I like about this book is that it flows in a chronological order- beginning from the author’s view of the communities in the sixteenth century, then the introduction to the acclaimed poet Malik Muhammed Jayasi and followed by the elaboration on the intention, interest and idea of composing this poem. It is commendable how the author presents the facts in such simple monologue that is not bleak at any point in time.

Jayasi apotheosized Sufism but ‘Padmavat’ was not an agitprop of any kind. He never intended to manipulate the communal sentiments by showing the battle between the protagonist and the sultan. ‘Padmavat’ throws a spotlight on the beauty and grandeur of the queen and the irrevocable love of Ratansen for her. It is a literary work that was composed during the early sixteenth-century keeping in mind the circumstances. The aim of the poet was not to offend the religious sentiments of anyone. If taken in the right spirits, the poem is beautiful and offers a confluence of words and phrases from Hindu and Islam Puranas.

Overall, ‘Padmavat’ by Rupa Publishers is a marvelous literary feat! Give it a go!

Also published on the website of ‘With the Coffee’.