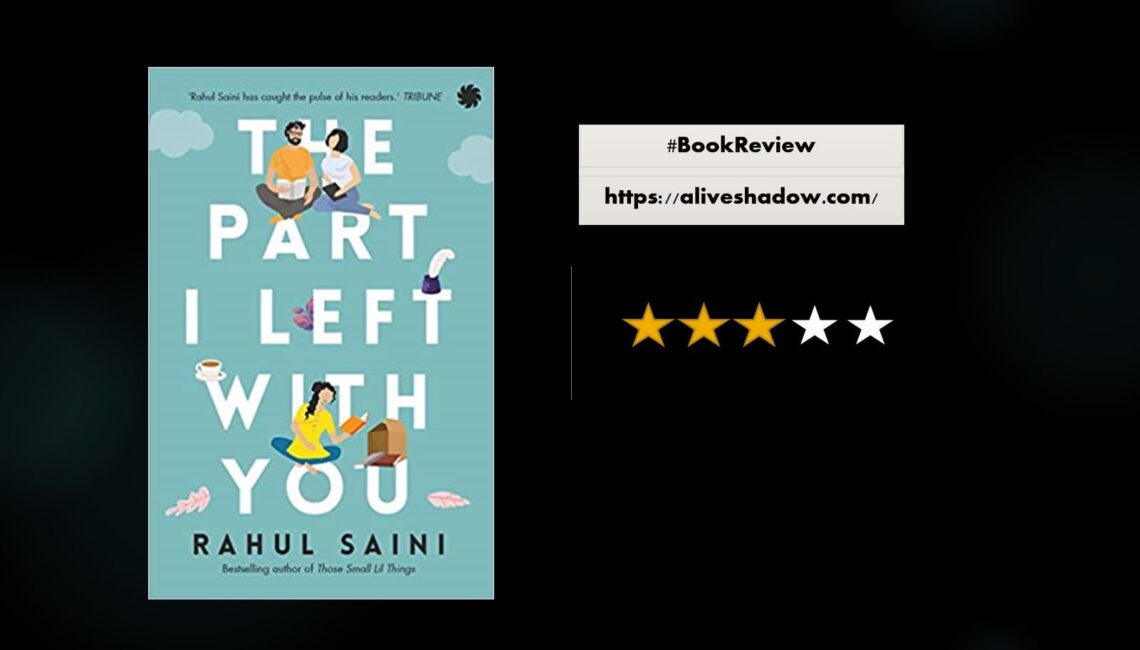 The Part I Left With You
Author: Rahul Saini
Publisher: Juggernaut Publishers
Rating: 3/5

Romance is a high-volume genre; it is the genre that almost every new author wants to try out. Consequently, the content/ stories are now becoming redundant and hardly any plotline appears new or refreshing. With this already in my mind, I picked Rahul Saini’s ‘The Part I Left With You’ that promised new characters, a newer setting and a different storyline. The promise is not a false promise yet there are quite many underwhelming aspects of this book that prevent it from winning the race!

The story pans around the lives of Ronit Sukhdev, a sourpuss or rather a party pooper, Nitasha, an iffy artist who seems confused with life and Ratna Kumari, a zealous fervent journalist who loves objectifying men and fantasizes about their muscular body! It must be quite clear from these adjectives that the skewed characterization is something that might irk the readers. Written from the point of views of these three characters, the story progresses when the situation at hand and the unfathomable white lie give her an opportunity to stay with her favourite author, Ronit, who has transformed into a pessimistic philosopher after a heartbreak. He comes across as a difficult man. As and when Ratna questions him (for the interview that she has to complete), his answers leave her (and the readers) baffled. I cannot deny that some of his ideologies do make sense but the aftermath of his breakup with Nitasha and the struggle he faces to move on are issues that have been left unresolved.

It is confusing to deduce the reason behind his dishevelled house, his unkempt appearance and his dislike for writing and publishing. This happens because the author misses mentioning the crux of the matter: the fool-proof reason why Ronit and Nitasha are supposedly having such a hard time. There is no doubt that the author is adept in portraying the emotional turmoil but how can one relate to the turmoil if the reason is unclear? Another thing to point out is the misplaced chapters which made it all the more difficult to focus on one character. The story shifts between several timelines- the one where Ratna and Ronit are engrossed in their chat sessions, the one where Nitasha is brooding about her prospect with Vikas and the one where little Ratna is dealing with the stress of her father missing in action. The relevance of this all? I don’t know. The knots were never tied and that left me wanting for a conclusion.

I can say for sure that the story is not a cliched romantic one but then the climax is totally predictable. The characters live on extremes: Ratna is so peppy that her emotions sound unreal, Ronit’s laidback nature and his hatred towards the world remains unpalatable because probably he isn’t able to justify his notions and Nitasha- she is the one who bottles up so much but doesn’t spill the beans at all!

Overall, I can say with confidence that ‘The Part I Left With You’ is not a cliched romantic tale but a story that tries to serve as the mirror between love and life. The different perspectives are enjoyable yet the loose ends can make you want a conclusive ending.