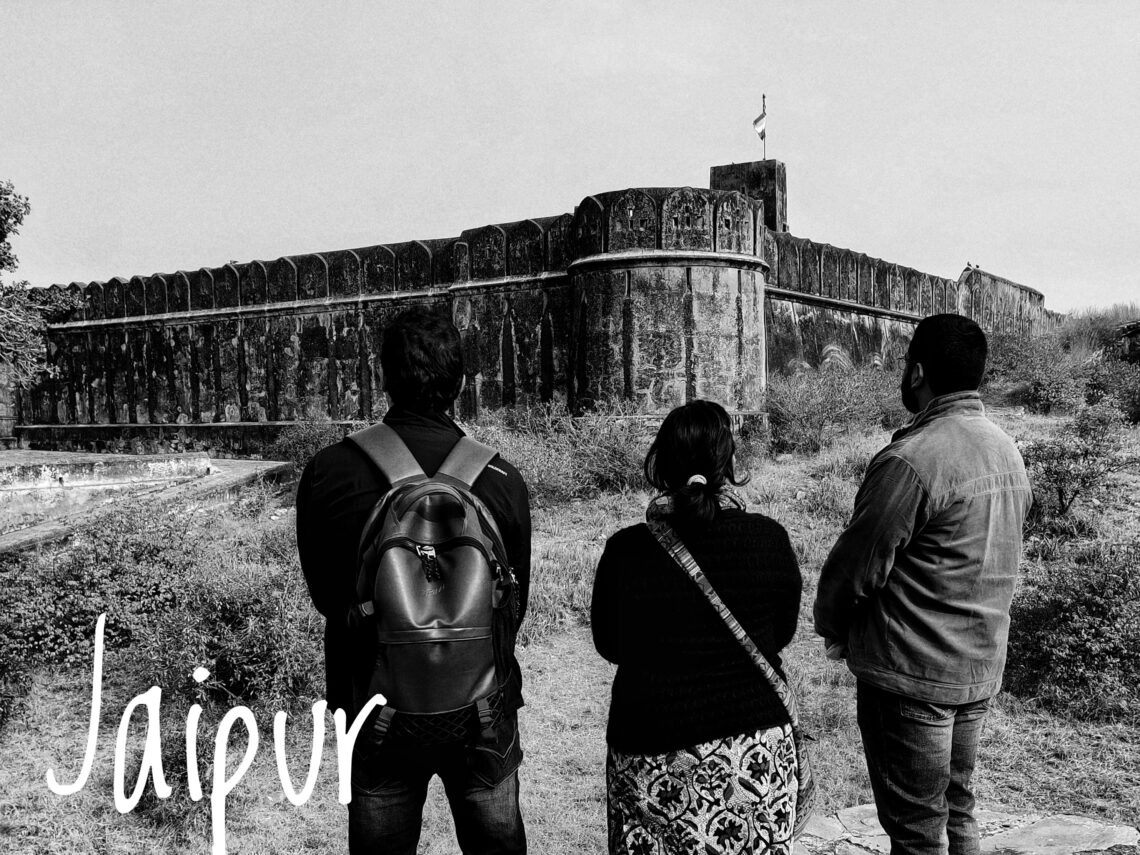 Known as the ‘pink city’, Jaipur is the capital city of the Indian state of Rajasthan that has numerous stories to tell. The nickname, ‘pink city’, is because of the characteristic pink colour of the buildings that make this city come alive. Upon entering Jaipur, one will be greeted by a massive gate that is beautifully painted and resembles the entrance of a great palace. Even though the roads connected to the eminent locations are very good, the roads connecting the market are quite congested and narrow. Nevertheless, if one rents a two-wheeler for tripping in and around Jaipur, one should be good to go.

We planned a trip to this beautiful city during the New Year and it was one of the best decisions we had taken in 2020. Ending the year with some adventure, exploration and risk was something that our mind and body had been craving for. Hence, off we drove towards Jaipur. We had planned the trip for 5 days (2 of which were spent in travelling as Jaipur is around 440 km from Bareilly). In those three days, we divided the time between exploring the monuments and shopping for the antiques. Overall, the cold month of December did bring us some respite with the help of the winter sun during the day and the chilling winds during the night. Here is a detailed break-up of our journey- the place we opted to stay, the cost, the shopping, the food and the ‘things we did’ part as well.

(All ticket prices are listed as of December 2020)

(All pictures are original- credits @footloosebackpackers)

Unlike the usual choice of hotels, this time, since ‘J’ was also travelling with us or rather we were travelling with  ‘J’, we decided to opt for a hostel. While J opted for a dorm, H and I opted for a private room. The cost break-up was as follows:

Not only was the hotel (Moustache Hostel, Jaipur) economical but the staff was also very genial. The internet connectivity was an issue but upon complaining, they did rectify the problem (temporarily though). The provision for hot water was there and the beautiful decor didn’t fail to impress us. The hostel has a roof-top cafe that allows the customers to bring outside food or alcohol and enjoy the open-surrounding. The kitchen offers general items like bread omelette, pakoras, paranthas and dal-roti-sabji for lunch and dinner. When you find nothing around, this cafe’s kitchen is the place that will come to your rescue. You will need to pay once the order has been served and that’s actually the best part of it.

The hostel was clean and the little apprehension we had about opting for a hostel and compromising on a hotel vanished when we had the chance to experience it first hand. Moustache is also available in other cities in Rajasthan, in Himachal Pradesh and some other places too. It is a chic place that offers ample opportunity to interact with strangers who have the same interests as you and also keeps you away from the cruel eye of the judgemental people.

Even though we drove to Jaipur in our own car, we rented a two-wheeler for convenience and ease of travelling. Jaipur, as mentioned before, doesn’t promise good roads all throughout. So, it is easier to rent a vehicle that can pass through those lanes easily and swiftly. The rental for the scooty was as follows:

The first day, we explored Jantar Mantar. Jantar Mantar is a collection of 19 astronomical instruments that were built by the Rajput king Sawai Jai Singh II. This is a world UNESCO heritage site that has the world’s largest stone sundial. It is quite interesting to see all these instruments. There are boards that explain the history and functioning of the instruments.

Next, we headed to Gatore Ki Chhatriyan which is a massive structure comprising many temples and tombs (most in the shape of umbrellas). There are no idols but that gives you all the more time and space to appreciate the architecture and absorb the beauty. Gatore ki Chhatriyan was the royal crematorium for the rulers of Rajasthan. Several cenotaphs add to the beauty of the place. The rich carvings are worth appreciating.

Last but not the least, the markets! Ah, the markets! Upon doing a lot of research, we narrowed down our choices to two of the prominent markets- Johri Bazaar and Bapu Bazaar. Sadly, we were not aware that the bargaining skills would come in handy when shopping in these markets. Hence, the first day, we bought things at the MRP and it was only when we meandered through Bapu bazaar and heard the conversations between the shopkeepers and the customers that we realized that quoting the price 50% below MRP was absolutely fine. In fact, if you were more skilled, you could bargain for even less. That’s the reason why Bapu bazaar is also called Daaku bazaar!

Early in the morning, we had our breakfast at the cafe in Moustache and straightaway headed to the City Palace. Until 1949, the City Palace was the ceremonial and administrative seat of the Maharaja of Jaipur. It is a massive palace where the current maharaja lives today. When the maharaja is in town, a small flag (of the size of Sawai) is hosted under the big flag in order to indicate that the maharaja is available to meet the common folk. The palace has several sections. In most of them, tourists or common people aren’t allowed. You can only explore the City Palace Museum, Sabha Niwas (Diwan-e-aam), Sarvato Bhadra (Diwan-e-Khas) and Arms and Armour gallery. This is one of the most prominent places in Jaipur that needs to be visited at least once.

Next, we headed to Amer/ Amber Fort. This fort is around 13 km from the main centre of Jaipur. It took us half-an-hour on a two-wheeler to reach the fort. The parking is available. It is advisable to take a guide along. Even though the guides start pestering you right from the entrance quoting prices as high as INR 400, it is better to keep walking till the ticket counter and there, bargain and then agree upon paying between INR 50 and INR 100. Since we didn’t take the guide, the narrow passages (surangs) and the numerous doors drove us crazy. When we think now, we realize that probably we would have missed most of the important structures already! Hence, take a guide along.

Amer Fort is a massive monument. It is spread across acres of land. If you go early morning, you might even find a quiet spot to click some beautiful pictures. This fort overlooks Maota lake which is/was the main source of water in Amer. Some of the salient spots in this fort are the Sheesh Mahal, the palace of Maan Singh, Sila Devi, Magic flower, etc.

After having walked for more than 3 hours, we headed to Jaigarh Fort which is considered to be a very important part of Amer fort. Owing to its strategic location and the fool-proof canal system, this fort served as a rescue place for the members of the royal family during the time of war. Thorugh a secret passageway that connected Amer to Jaigarh, the members of the royal family would escape to Jaigarh. As mentioned before, we took a guide this time.

Note: Even though the entry ticket has a provision of a Government guide for INR 200, we decided to skip booking the guide from there and entered the gate. One of the staff members offered to take us around for 50 bucks and we agreed thinking that the staff member would definitely know more than the government guide. Our decision proved right and we got to know about the history of Jaigarh fort in detail.

While returning from Jaigarh fort, we crossed Jal Mahal. Even though we couldn’t go there as tourists weren’t allowed to visit, we got a good glance at the beautiful and sturdy architecture of the same. The drone shot further added to our satisfaction.

We called it a day after binge-shopping at Bapu Bazaar.

Starting our day early, we headed for the Albert Hall Museum (of course, after our breakfast). Albert Hall Museum is the oldest museum in Rajasthan. It is situated in Ram Niwas Garden. This building presents a classic example of  Indo-Saracenic architecture. This type of architecture is also called Indo-gothic architecture and was built by the British in the 19th century. Spread out in two floors, this museum is a storehouse of ancient cooking ware, coins, scripts, artillery, clothing and jewellery. There is a mummy too! It will take an hour to explore the whole place.

Post this, we headed to Hawa Mahal that comprises 953 windows that add to the beauty of this palace made up of red and pink sandstone. The palace extends up to 5 floors. Hawa Mahal is also called the ‘Palace of Winds’ and was built to allow continued circulation of wind within the palace. It served as a summer retreat for many Rajput families. It will take approximately one hour to take a tour of this palace. Try to visit this early in the morning to avoid the rush. Also, try to click pictures of the corners and the multi-coloured windows. You will cherish the result. Right in front of this building are many cafes that offer a beautiful view of the palace. We tried Windview Cafe and the experience, in terms of the view, was wonderful. The food was average. It was over-priced and the delayed service further added to the dissatisfaction. One fun observation that we made was that this cafe served us sugar pouches that were from J. W. Marriot!

No doubt that the view was stunning as looking at Hawa Mahal up-close gave a different feeling altogether. There are other cafes as well. So, try those out too!

Following this beautiful experience, we drove to Galtaji Temple but sadly, it was closed due to Covid-19. Even though we couldn’t go inside, we managed to capture the beauty of its architecture through the drone. While returning from Galtaji Temple, we decided to stop by Birla Temple, finished the ‘darshan’ and then headed to Nahargarh Fort. Since it was already dark, all we could manage was a glance at the walls of the fort. We had to return to the city. Hence, we called it a day after binge-shopping at Bapu Bazaar yet again. Note:  Birla Temple had no entry fee.

The last day was reserved for travelling back to Bareilly. Since the journey was long, we started at 6:00 a.m.

Jaipur is one of the best tourist destinations if you are interested in knowing History, shopping and roving on a two-wheeler. We are so satisfied that we didn’t completely lose out on travel during the pandemic, for the trip to Jaipur definitely blew away the cobwebs.