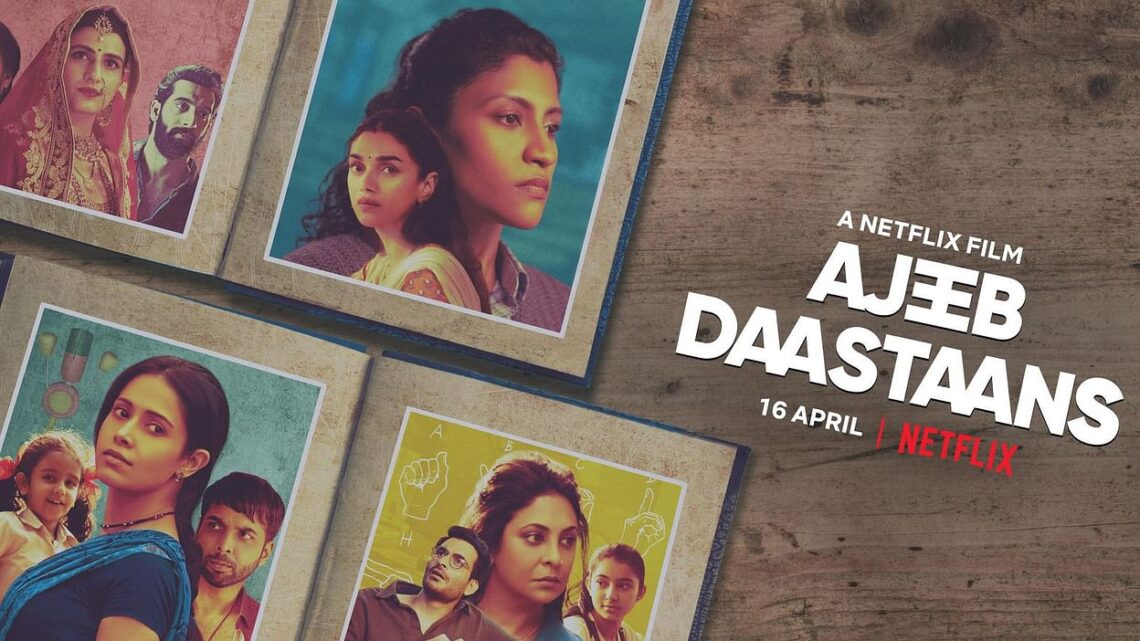 Very few times Bollywood passes the muster based on the talent of the scriptwriters and the directors. This time, it aces the test. After a long haul and foisted torture of irrelevant movies like A Girl on the Train and Mrs Serial Killer, Netflix has finally found a strong ground on which it can safely claim that talent still resides in this industry. The new trending feature film ‘Ajeeb Daastaans’ sets the standard high because of brilliant storytelling and near-perfect execution of the plot. Cherry-picked cast, on-point dialogues, twisted tales and unexpected climax make this movie a delightful watch. Ajeeb Daastaans is an anthology of four short stories that majorly focus on the chameleonic nature of man. Each story has a sub-theme yet the most powerful message in each one of them is the portrayal of a stimulus that prompts the animal-like instinct to come to power and take the reins of the conscience in its hands. While each story evokes a variety of emotions, the endings promise to leave you benumbed.

The first story stars Jaideep Alhawat, Fatima Sana Shaikh and Armaan Ralhan. The idea pans around the marriage of Lipakshi and Babloo who are tied in the nuptial bond because of the family pressure and the political power that the marriage brings along. Enters Raj, the son of Babloo’s driver who is not only handsome but also witty. His looks are deceptive and words- wise. He explores the pathos of Lipakshi’s life who struggles to feel accepted by her husband. Alone and hopeless, she does everything possible to humiliate Babloo and make him feel the need to consummate their marriage. But her charm fails. What follows next is a web of betrayal, lies and revenge in which the three characters get sucked gradually. With every changing frame, the unexpected turn of events is sure to leave the audience in splits! Fatima and Jaideep are fabulous in their respective roles. Armaan, the new boy in town, succeeds in leaving a lasting impression too. This story is titled ‘Majnu’ for several reasons I think. Majnu translates to a lover. Here, each character is a lover- a lover of money, a lover of power and a lover of love!

The second story is called ‘Khilauna’ which translates to ‘toy’. Starring Abhishek Banerjee, Nushrat Bharucha and Inayat Verma, this story acts as a mirror for the viewers. Establishing a clear dividing line between the rich and the poor, the needy and the resourceful and courage and fear, Khilauna is suspenseful and sinister. Meenal, a household help, and her little sister, Binny, try to make ends meet by washing utensils, mopping and cleaning and catering to the needs of the rich. While Meenal knows how the world works, Binny just picks on the cues thrown by her sister. Sushil, laundry personnel, loves Meenal but cannot afford to show his affection in public because the new secretary warns him to keep his hands off women. In a strange turn of events, Meenal decides to work in the secretary’s house so that he is able to quench his lust by getting an opportunity to stare at Meenal and Meenal, on the other hand, can convince him to allow power supply in her small house. This barter system is beyond comprehension, for Meenal’s naivety to underestimate the secretary’s lust is unfathomable. Secondly, the climax is questionable. A murder is committed and the culprit is shown to have no real motive behind committing the sin. Several unanswered questions linger long after the movie ends and the plausibility of events is sure to make the viewers rack their brains! Nevertheless, it would be unfair not to compliment the pace and execution of the plot so far. Nushrat and Abhishek are splendid in their roles. Little Inayat exemplifies her character! I only wish that the cliffhanger was more comprehensible!

The third story, ‘Geeli Puchhi’, is my favourite amongst the lot. Based on the ill-treatment meted out to the Dalits, this story has Konkona Sen Sharma and Aditi Rao in the lead roles. Bharti (Konkona) works in a factory and desires to become a data operator. Owing to her homosexuality, her tomboyish appearance and her unsuccessful relationship, the manager decides to hire Priya (Aditi) as the new data operator even though the latter has no clue about Tally or Excel. While the manager prefers face value over talent, Bharti comes to grips with this grim reality soon after Priya extends a hand of friendship towards her. The two ladies explore their attraction towards each other only to realize soon enough that homosexuality is not acceptable and the only way to be happy is to bear a child. The twist in the tale comes when Bharti makes a revelation before Priya and that changes the momentum of their relationship. What follows next is despair, betrayal and revenge. The twist, in the end, is unpredictable yet pleasurable. The movie evokes empathy and sadness and serves as a grim reminder of the society we live in. Konkona and Aditi are perfect in their respective roles. The plot is strong and the execution is flawless too.

The last story has very few dialogues yet it promises to speak volumes. ‘Ankahi’ starring Shefali Shah, Tota Roy and Manav Kaul is a story about disintegrating marital relationship of Natasha and her husband. In the quest to provide for their daughter who is inching towards deafness, the couple set their priorities straight and encounter rifts along the way. While Natasha years for the human connection that her husband fails to establish with both her and her daughter, her husband fights tooth and nail to arrange for a cochlear implant for his daughter. Amidst the despair and weakening bonds, Natasha falls for Kabir, a deaf and dumb artist, who views life with a different lens altogether. Things become complex gradually and Natasha is left in a whirlpool where no port is in sight. The disappointing part about this story is the glorification of adultery (when committed by a woman). In all probabilities, the setting, music and reactions would have been different if a man was caught having an extramarital affair. Hence, this disparity is what put me off. Adultery is adultery; it cannot be glorified based on gender! Nevertheless, the story does convey the message to some extent. The overall impact is lacklustre and the performances are also average. Somehow Shefali didn’t quite impress me with her role this time. Manav Kaul is superb!

So, that’s all about Ajeeb Daastaans. They are definitely ‘ajeeb’/ strange yet they are delectable. Unlike Ghost Stories, this one has more food for thought.