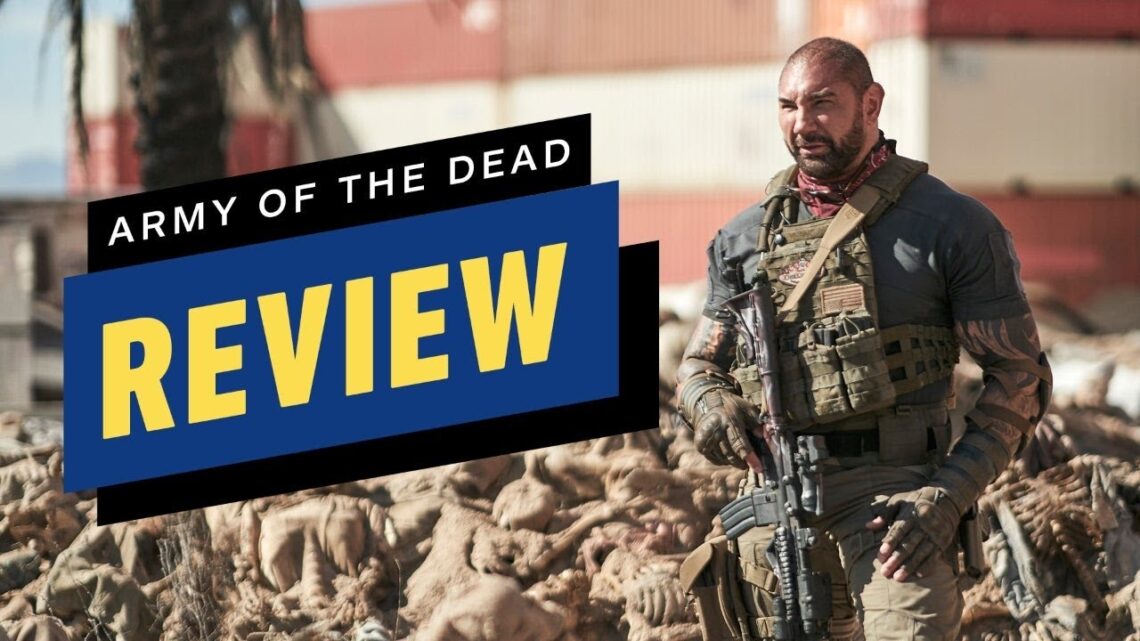 The Army of the Dead is another Snyder movie that has become the talk of the town owing to its brave cinematography and experimentation with the digital gears. The movie is about a heist that is set amidst a zombie apocalypse. The premise is not new yet there are certain aspects that successfully capture the attention of the viewers and provide much-needed relief. With a new take on the appearance, behaviour and purpose of the zombies, The Army of the Dead establishes its intention right in the very first scene. Hence, the opening and the closing become statement scenes of the movie and the viewers are not left disoriented amidst all the blood and gore.

Yes, this movie is a storehouse of blood and gore. There are sequences when the characters slit each other’s body and the blood literally oozes out. There are scenes that can make one feel suffocated. But if one watches the movie with the intention of being entertained, then this is a good choice.

The story begins with the collision of a military transport which eventually leads to the release of an extremely dangerous payload that transforms all the surviving soldiers into obnoxious creatures that are quite like zombies. The passenger inside the payload becomes the head of this army and wreaks havoc in the city. This is followed by a musical montage that introduces us to the survivors of this zombie holocaust. The background score, like in all other Snyder movies, does its magic and makes the watching experience all the more enjoyable. What moves the plot further is the introduction of a wealthy man called Tanaka, who comes to Dave (one of the survivors), with an offer. While the zombie king runs the casino within his walled kingdom, Dave is asked to rob $200 million from the vault inside the casino. He is supposed to assemble a team and get down to business. The rest is quite predictable, isn’t it?

The Army of the Dead deftly combines a heist with a zombie slaughter but certain moments did remind me of The Walking Dead and Money Heist. What was different was the introduction of alpha zombies who were faster and smarter, their ability to reproduce and the presence of their guard- a white zombie tiger. The make-up is so good that it can provide genuine disconcerting moments throughout the film. The plot explores several themes like the father-daughter relationship, survival of the fittest, betrayal, second chances at love and redemption. The flaw, however, lies in the execution of these themes. The narrative lacks the depth that could have given a clearer insight into what the characters were feeling during their moments of reflection. Since this movie is more of an action-packed thriller, the story doesn’t spend much time exploring the pathos of deteriorating relationships and mindless slaughter for the sake of money that belongs to someone else. This leads to a disconnect and the whole time you watch the movie, you just visually connect with the theme and are emotionally distant.

Overall, The Army of the Dead offers spectacular special effects yet the acting leaves something to be desired. Nevertheless, Snyder doesn’t disappoint completely. The implausible climax helps the movie be classified as an entertainer. The colour tone of the set, the subtle humour, witty one-liners, the unanticipated twists and deaths- all added to the mix and did provide me with the chance to appreciate the craft and creation.

Hence, if you are looking for an entertainer, a no-brainer and a gory bloodbath, The Army of the Dead should do justice!

Till the next time,
Ciao!