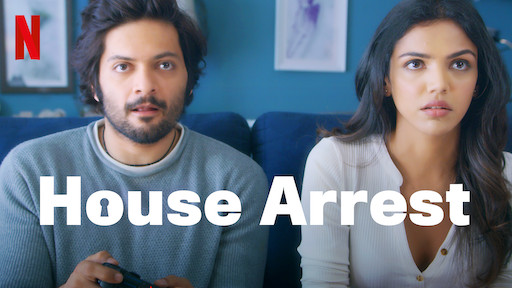 I read somewhere recently that Netflix has become the dumping ground for all the movies and series that would otherwise be ignored even if their posters are made to shine in the dark. While several movies falter in terms of content and quality, some movies are borne from a brilliant and unique idea but owing to poor execution, they fail miserably at the box office. Such is the story of House Arrest, a movie that fails to arrest the attention of the viewers for long because of its flawed narrative and lazy execution.

The story is based on the phenomena of Hikikomori, a Japanese term for ‘pulling inward or confinement’. Karan (played by Ali Faizal), a victim of Hikikomori owing to his tumultuous past, has been within the four walls of his house for more than six months. When his friend, JD (played by Jim Sarbh) fails to convince him to step outside, JD decides to employ other methods (s) to achieve the same. He asks a journalist, Saira (played by Shriya Pilgaonkar), to meet Karan and complete her story. Consequently, Karan ends up having visitors- not only Saira but also his neighbour’s, Pinky’s suitcase become the uninvited guests! As Karan struggles to keep his OCD in check and communicate unwillingly with the unwanted people around him, the much sought comic relief is served. But as the story progresses, the urgent need to bring in mystery and thrill at the cost of comedy and logic make the plot insipid.

The story takes place inside Karan’s apartment, an apartment so beautiful that I couldn’t help but gawk at it. When Karan ends up with Pinky’s suitcase, the focus of the story shifts to the contents of the suitcase. Upon Saira’s arrival in the house, the focus of the story again shifts to the romantic relationship that brews between the two protagonists. Hence, this sort of inconsistency fails to tie all the loose ends together. Barkha Singh as Pinky is too boisterous to endure. On the other hand, Ali Faizal is fantastic as Karan. His emotions are so genuine and innocent. As gullible as he seems, his story also becomes vulnerable. His chemistry with Saira is worth watching but the problem is that their story is unnecessary. Amidst cheesy romantic scenes, the writers forget about the central theme of the movie. What results is a humdrum climax that is not worth waiting for.

Overall, House Arrest is not liberating, unlike the concept. It is going to arrest your mind and make you contemplate your decision about watching the movie in the first place. However, if you find the idea of a slow-paced movie lacking action enticing, then you can give it a try. After all, it does have a creative plot that gets assassinated gradually!