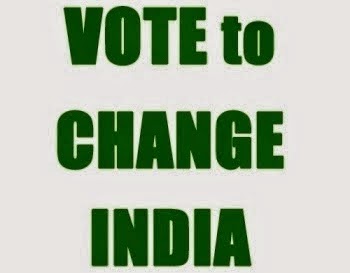 And finally after a long long wait for months, this day has arrived. With all new hopes and desire for a new government, people are looking forward for the counting process. The mere thought of who shall become the next PM of our country sends jitters all over the body. On one side are the citizens of India, waiting for the results and on the other side there are army officials and the policemen, who are worried about the consequences that this election will lead to. Every other most prone area is having a three tier security provision. The point to think about is that even though most people are having all their iron rods in the fire, yet they have enough time to participate and find out the results of the counting. And this is actually a good sign!
It is indeed a sign of awakening. People are actually taking up the responsibility of forming the government and selecting a better person. It is not in my hands to control who will win, but I pray that all the odds be in favour of the best person as that is the only way the ball will be able to bounce.

With incidents of riots, communal violence and violent rampage in cities like Meerut, most of the other cities have been put on red alert. In fact that is the exact way how a cookie crumbles. Like the two sides of a coin, there are two kinds of people, one those who favour the decision and other those who don’t. The side that loses restores to violence. Maybe the latter assume that becoming violent will compensate their loss.
The strange side to this entire process is that people are not looking up to the candidates in hope for a better India. Rather, the majority of them are favouring a particular candidate for communal purposes. For an instance, Muslims are favouring Congress while Hindus are all geared up to welcome Modi as their PM (according to what I have heard from my friends, colleagues and neighbours). The reason for this is that Modi is expected to reduce the Islamic community to a minority and Congress is assumed to favour their majority. Therefore, it is quite clear that votes have already been decided on communal basis.

My take: Why do Hindus or Muslims want each other to be reduced to a lower number? Why at all are we discriminating on communal grounds? Can’t there be peace and security in our country? Although the youth of this country has risen from the deep slumber of ignorance, still there is the need to broaden their horizon of thinking and moving in the right direction.