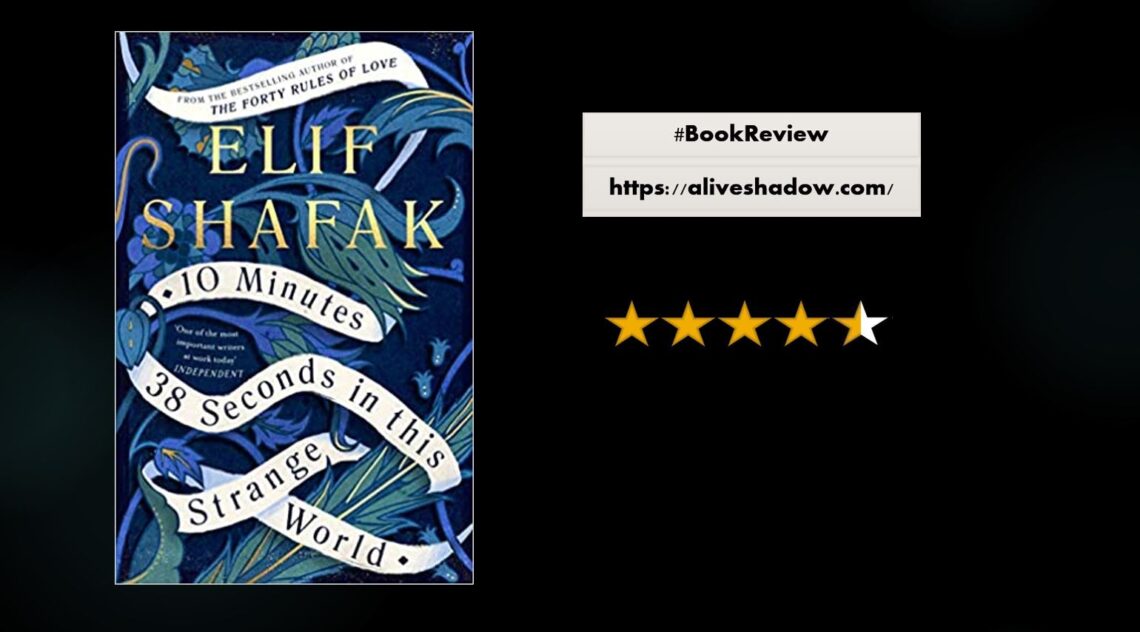 Elif Shafak is one such author whose simple language pierces the heart so brutally that one cannot avoid but think of the overwhelming setting of the plot and the injustice meted out to her characters. ‘10 Minutes and 38 Seconds in This Strange World’ is Shafak’s 11th novel which addresses the grave issue of sexual violence in Istanbul. Deftly dealing with the aftermath of fighting for freedom and searching for a life devoid of misery and slavery, the author uses a bold narrative to highlight the stereotypes and notions that are perpetuated in the society right from the very beginning. Majorly focusing on the plight of women in orthodox households, she brings forth a set of startling customs and traditions that these families follow. Divided into three parts: the mind, body and soul, this book takes you through Leila’s journey from when she was in flesh and blood to when only her memories remained.

The story of Tequila Leila begins at the end. She is found dead in a dumpster on the outskirts of Istanbul. While her body is ready to take the plunge into the new world of the dead, her brain stays active for 10 minutes and 38 seconds even after her death. During these last few minutes, she is reminded of prominent smells and tastes that have a lingering memory attached to them. As we get to know about these smells and tastes, we see Leila’s character peeling before us like an onion. Her vulnerabilities, fears, apprehensions and her strengths, spontaneity and thirst for love and care are noticed. It is interesting to read about how the taste of salt reminds her of her birth and how she was snatched from her biological mother and handed to her father’s second wife. As she remembers the smell of bubbling vats of lemon and sugar, she is reminded of the large hall where the women of the house could be free, be themselves, while they waxed their hands and legs. Several other memories aid the readers to give a proper structure to Leila’s character. We get to know about her father’s inadvertent silence upon knowing that his brother rapes his daughter. Her father, an unswerving victim of obnoxious family traditions and the one who carries the responsibility of protecting the family pays no heed to Leila’s pleas. Instead, he fixes her alliance. This proves to be the turning point in Leila’s life, for she decides to abandon the creature comforts and sets on an unprecedented path of discovering her true self.

As Leila moves from the city of Van to Istanbul, a lot happens. With the help of a dear friend, she finds work at a brothel. With more smells and tastes, we understand how she desires love of a man. We are also introduced to her friends, her water family. In Nostalgia Nalan’s words, ‘The water family was formed much later in life and was, to a large extent, of your own making. While it was true that nothing could take the place of a loving, happy blood family, in the absence of one, a good water family could wash away the hurt and pain collected inside like black soot.’ Leila also remembers the taste of a wedding cake with buttercream icing during the last few seconds before her brain shuts down. It is painful yet provides a sense of relief when this slight ray of hope shines on Leila. But soon it vanishes and Leila meets her brutal fate when she is mysteriously murdered in the middle of the night.

In the second part of the book which is titled as ‘Body’, the friends take up the onus of giving Leila a proper funeral. Since Leila’s blood family refuses to claim her body, her body is buried in the Cemetery of the Companionless. It is Nalan who proposes the idea of stealing Leila’s body and burying her beside her dead husband D’Ali whom she met at the brothel, who had not come that day to exploit Leila’s body but had come to talk, just talk to her. When Zeynaab122’s religious beliefs contradict Nalan’s plan, she says that ‘everyone had a right to a certain share of dignity. And inside your dignity, as if it were a patch of soil that belonged to no one else, you would sow a seed of hope. A tiny germ that one day, somehow, might sprout and blossom.’

Elif Shafak’s writing style and her impeccable plotting won my heart. This is the first book that has been so neatly organized in terms of the sequence of events. Even though the second part felt a little drab, it picks up pace after some chapters. With crisp dialogues, the author aces the test of touching the hearts and minds of her readers. A victim of dwarfism, Zeynaab’s distance from hope was disheartening. She believed that ‘hope was a hazardous chemical capable of triggering a chain reaction in the human soul.’ Using symbolism in form of Martin Luther King holding a crystal ball that would not tell the future or the pigeon feather flying overhead, Shafak paints beautiful imagery. She uses elements that foreshadow what’s to come. Leila’s rebellious nature is hinted at when she questions God who punishes humans but doesn’t come to protect them when they need him. Even when Leila is able to understand the duality of things like when she says that ‘one circle bound a human while for other one circle was a symbol of freedom- humans are not born into a lower caste by choice’, her thoughts echo her future.

‘Are we, the humans, like sheep and goats, composed of two kinds- those who never forget and those who forgive? Sheep can identify faces. Goats get upset easily but they forgive quickly.’

Shafak’s intelligent writing points out the irony of how humans perceive humans. They judge each other based on the job, financial status, company they keep and their beliefs. They do things in the name of religion not knowing if their beliefs or notions are leaving behind a scar on their soul or not. Nalan says that ‘religion is commerce- give and take’ and that is proved right when Leila’s body is sent to the Cemetery of the Companionless. Just because the rules of the book prevent a prostitute or a streetwalker from being placed beside the respected, she is denied the rightful burial.
Overall, 10 Minutes and 38 Seconds in This Strange World is an example of a stirring fiction that evokes a mix of several emotions. The narrative is binding and it penetrates your very being. Like Handmaid’s Tale, this story about Leila is sure to leave you thinking about what Leila would have felt like. Satisfactory yet something that leaves a bad taste in your mouth, this book deserves to be read. Like I had said earlier for another book- this might be dismal and bleak but there is a certain addiction that one develops soon.