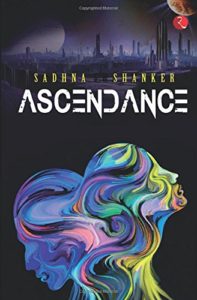 Sci-fi genre is that one genre in which most of the characters, settings and situations are the figments of imagination. Seldom the situations are relatable but most of them are flights of fancy. However, we all love this genre because it gives us a chance to escape the usual hackneyed routine and chaos of life. ‘Ascendance’ is a fast-paced sci-fi thriller that aims to make your jaws drop with its plotting and mysterious sequences.

Set on an alienated planet called Elone (the one that has three moons unlike the Earth), this story traces the death of one of the inhabitants. The planet inhabits two species, both in search of achieving immortality. Seeni, one of the creations of Elone, goes missing and is claimed to have been ‘Taken’ (meaning death). Since the Fence separates the two species on Elone, Seeni’s people believe that she has been taken by the people on the other side (the Men). As each layer over the hidden secrets peels off, we are introduced to plenty of new names and places as well.