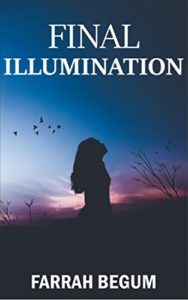 “The monster I run from is in me.” Isn’t this true? We all are victims of human foibles that might be a result of our character flaw or any weakness. But with time, doesn’t this minor weakness start taking a toll on us? Zubeida displays the same in this story. Her life is near perfect when she is young; finding a flaw is equivalent to finding a needle in the haystack. But as the time takes leaps, the internal demons that were missing in action throw her off balance.

Brought up by a single parent (mother), Zubeida’s character is comfortable being around the people of the same gender. Not only is she repulsive towards men but also fears that her inability to express and take a stand might become prominent before them. The cotton-padded world that she was living in, crumbles into tiny pieces when her best friend’s boyfriend physically abuses the latter and opens the doorway to hell for Zubeida. Guided by her foibles, she succumbs to depression.

‘Final Illumination’ focuses on many vital subjects like the healing power of love, specious belief that all men are bad, objectification of women and the hard-bitten reality of being a single parent. There is a lot to learn and decipher from Zubeida’s story. Written with a flow of genuine emotions, this story strikes the right chord and has the potential to make the readers yearn for more.
However, there are typing errors and the cover is not appealing at all. Both these aspects could have been better.

‘Final Illumination’ is all about the strength and the courage that is required to fight the internal demons.

‘Your dragons are frightened parts of your personality, and you alone can experience and heal them’.
The plot is gripping and the lucid narration acts like a cherry on the cake. The creativity in crafting the characters can pull one inside the whirlpool of emotions.

Overall, ‘Final Illumination’ is a strong, emotional and intelligent piece of fiction which will definitely touch your heart.