‘People have entire relationships via text message now, but I am not partial to texting. I need context, nuance and the warmth and tone that can only come from a human voice.’
~Danielle Steel 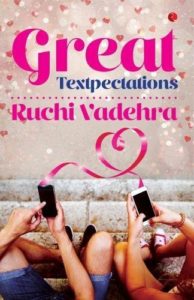 The ever-evolving technology has necessitated change- change in the mindset, change in tradition and change in approach. Letters that were once considered an imperative source of communication have now become redundant. Texting is the new letter-writing. It is ironical how people find it relieving to send a message to the near and dear ones, thereby refraining to meet those people in person. Not only has this diminished the scope of the bond building, but has also led to increased distance. ‘Great Textpectations’ is a coming age novella that narrates a love story that brews over text messages. Astute, levelheaded but arduous, this book brushes aside the myth that relationships that begin in the virtual world, don’t last long.

Amaya, an ambitious, earnest and uncomplicated woman in her mid-thirties loves to explore all avenues and cherry pick the opportunities to expand her business. She does nothing by halves. A perfectionist that she seems to be, she is also the one with exemplary vocabulary and profound insights. Contrary to her personality is Rohan Kashyap, who is coquettish yet suave. He has the gift of the gab. The protagonists meet by chance over an online game of scrabble. Layer by layer, scene by scene the chemistry becomes intense between the two protagonists and they end up in a happily ever after. That sums up the story in short.

Strong narrative and well-sought characterization are strong points of this book. However, the extraordinarily intelligent conversation via the text, at times, becomes baffling. Though the language is laudable, yet I found it difficult to decipher the meaning of certain text messages.

Rupa does a great job with editing and printing again.