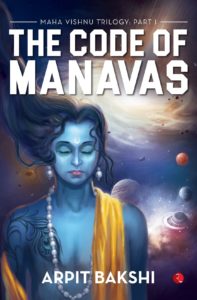 “Fate is inevitable. But it is our actions and the perception that pave our path for success.” Mythology is that branch of study that deals with myths and folklore. Much has been read and talked about the mythological characters. Much has been hypothesized. There are beliefs and there are myths. But what if these beliefs help in materializing the character from mythology? Would our perception change if we are introduced to the viewpoint of the characters themselves? Krishna was one of the pivotal characters of Mahabharata. He helped in levelling the ground and reaching a consensus. ‘The Code of Manavas’ describes the character of Krishna in a new light that helps the reader to learn more about his different avatars as well.  The story is based on the period that (read hypothetically) is yet to come. This novella describes a new race of immortal beings (called Manavas) who are waiting to be saved by the supreme power and survive the cataclysm.

Krishna faced obstacles at every point of his life and always ended up burying the hatchet and striving to help others. Even in AD 2050, after the human race has perished, Krishna struggles to help ‘Manavas’ fight against the evil and find their safe haven in the city of Madhavpur. “The Code of Manavas” is a book that exposes the readers to an untold truth; a truth that is not only difficult to anticipate but also to assimilate.

Written with strong and gripping narration, the storyline is new and offbeat. We have all heard about principles and rules and how they played an essential role during Ramayan and Mahabharat. Krishna, in this story, tries to establish a balance between the two most misunderstood words. The writing style is not only comfortable but also fast-paced. However, the lengthy monologues tend to baffle the readers at times, especially if one is not an avid reader of mythology. Nevertheless, the vainglorious character of Krishna backed by fine-tooth comb editing leaves an infallible mark on the mind. The subtle and fluid cover is beautiful. Kudos to RC Prakash for such amazing work of art!

This story has mythology, fiction, mystery and spiritual aspect associated as well. The vocabulary is exemplary. I would like to compliment the author’s ability to use the right words at the right time.

Overall, this brisk-paced twisty thriller is sure to leave the readers wanting for more.