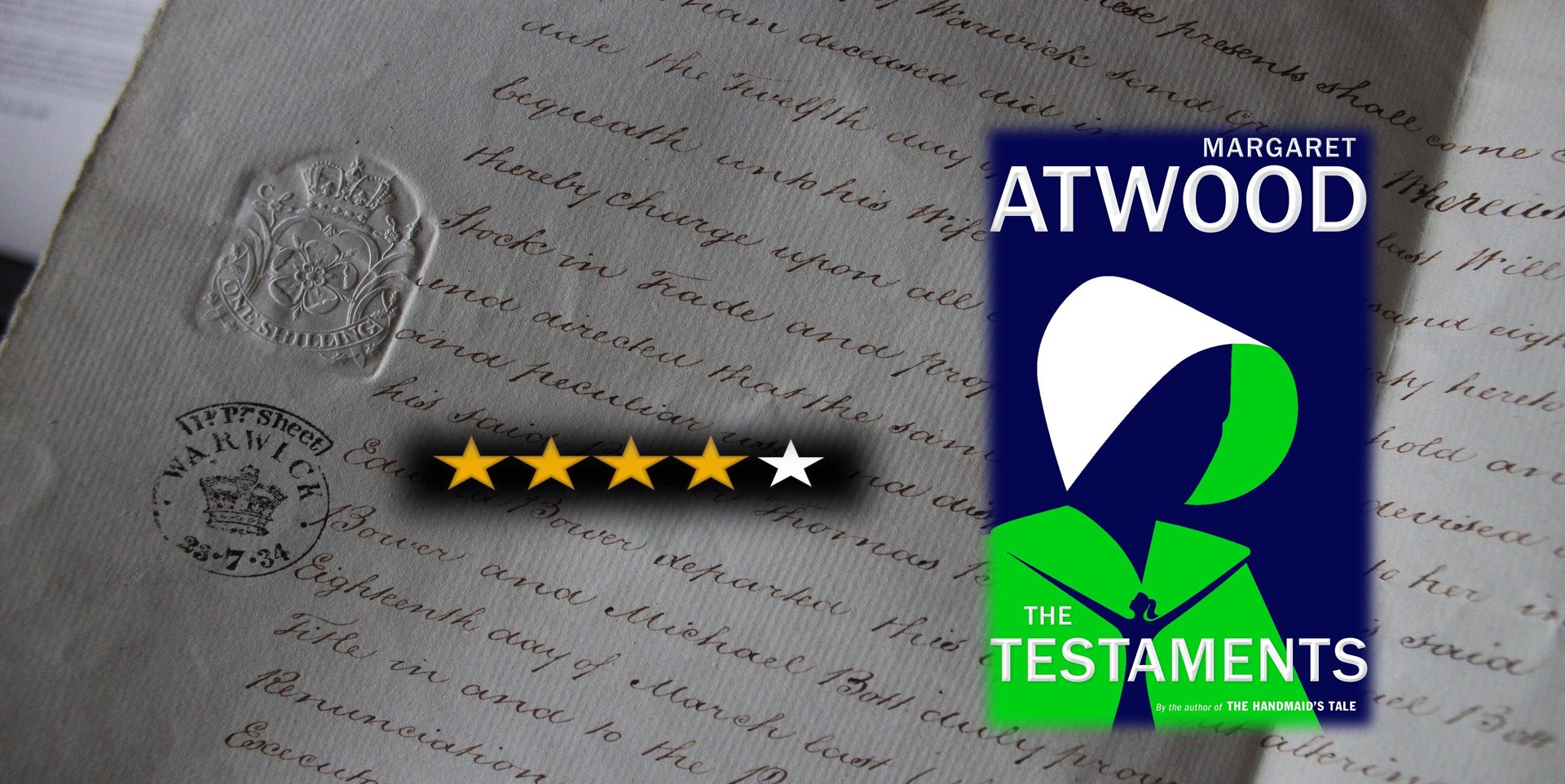 Having read The Handmaid’s Tale last month, I was sure to pick up The Testaments, which is a sequel to the first part. Leaving the door ajar with Offred’s sudden disappearance, Atwood transitions the narrative to a sombre yet equally bleak and disgusting tone. The setting of this book, too, remains the same- Gilead- where vox populi doesn’t matter. For those who haven’t read the first part, here is the link to the review (a brief summary included) of the first part.

Aunt Lydia was first featured in The handmaid’s Tale. In this book, it is revealed that before becoming a part of the misogynistic propaganda that governs the functioning of Gilead, she was a single, middle-aged lady who was a judge. She is rounded up along with some of her friends and then informed that her services and her knowledge would be used in the new republic. She doesn’t object nor does she fight back even when her friend disappears mysteriously. Chapter by chapter, layer by layer, her character evolves and evokes hatred from all. Soon the readers realize that she is the spine of this story. It is only towards the end that the readers get aware of her real motive- to overthrow the puritan theocracy once and for all by biding her time in Gilead and collecting all the evidence that can be used against those in power.

Contrary to her is Agnes, a young girl who grows up believing that Commander Kyle and Tabitha are her parents. Shortly after Tabitha’s death, Commander Kyle marries Paula, a vicious lady who wants Agnes gone for good. Thereafter, we are left to witness Agnes’ agony and her decision of not getting married and rather becoming an aunt. Her journey from being a mute witness to everything wrong to becoming wiser and stronger is worth reading.

The third important character is that of Daisy. She is brought up by her foster parents, Neil and Melanie. Unfortunately for her, they are killed by the terrorists on her 16th birthday. Devastated and hopeless, she is taken care of by Ada and eventually sent to Gilead as a Pearl Girl. Her mission then becomes to extract Gilead’s insider’s database of evidence that can be used to expose the truth. Her transport to Gilead in the garb of a new pearl girl recruit turns the tables. Together with Agnes and Becka, she guides Gilead to its eventual doom.

When I think of The Handmaid’s Tale, the scenes that refuse to exit my mind are Offred’s ritualized rape by the commander, the persecution of the offenders of the law, the bodies on the wall and Offred’s boredom. Since the entire plot revolved around Offred, the treacherous side of other characters was shrouded with Offred’s misery. However, in The Testaments, a more comprehensive insight is given into the mind games being played in Gilead. Aunt Lydia was already established as an obstinate old lady who was a stickler for the rules but in the sequel, we are introduced to another side of her character. There are two types of people (that we know of)- the ones who protest and the ones who give in. Aunt Lydia is the third type- the ones who bend their principles and compromise their morals to fit into the new system. She is ruthless, merciless and as sly as a fox. However, she always carries a surprise up her sleeve. Her transformation right from birth to the fall of Gilead is worth appreciation. Contrary to Aunt Lydia, we have Agnes and Daisy who are more inclined to playing safe, following the rules and being alive. In fact, if we look deeper into the characters of Agnes and Daisy, they, too, are quite opposite (not in ‘Aunt Lydia way’ though). While Daisy calls a spade a spade, Agnes believes in minding her Ps and Qs.

Several other characters appear and disappear in the story. There is Becka, Ada, Gareth, Elijah, several aunts, Commander Jud, Commander Kyle and so on. But never even once will these characters leave the setting because of their long-lasting aftereffect. They are more than just sidekicks. Though it is not made clear whether Offred re-enters the storyline, the wise don’t need an explanation for that. Unlike The Handmaid’s Tale, The Testaments is quite predictable. The climax becomes clearer mid-way and then it becomes more about just following the course of the narrative to reach a conclusion. There are some genuine moments of grief and agony. Aunt Lydia’s plan of suicide is one such moment. She reminded me of Professor Snape from Harry Potter. “My messengers have flown. When worst comes to worst—as it will very soon—I’ll make a quick exit. A needleful or two of morphine will do it. Best way: If I allowed myself to live, I would disgorge too much truth. Torture is like dancing: I’m too old for it. Let the younger ones practice their bravery. Though they may not have a choice about that since they lack my privileges. But now I must end our conversation. Goodbye, my reader. Try not to think too badly of me, or no more badly than I think of myself.” These are her last words.

The Testaments is no doubt engaging and overwhelming but it doesn’t impact you as much as The Handmaid’s Tale. With the narrative spreading across different lands, different people, different modes of transport- there is a lot of variety here. That can either be good or bad. For me, it failed to entice me, for the mention of instances/ stories in the testaments of witnesses failed to disturb me or surprise me. I had read it all already in the first part. The mellowed atrocities further added the overall ‘less’ appeal of the book.

However, there are some strong points that one cannot overlook. For instance, the powerpack action, the escape sequences, the chapters that build up anticipation and the revelations of the bloodlines that make you stop dead in your tracks- all these make this book worth every minute. Margaret Atwood just aces this genre. Her storytelling is powerful and impactful. Her characters are emotive and have the ability to establish a connection with the readers instantly.

Overall, unlike the first part, The Testaments might not be as interesting as expected but it is surely going to prove the adage- Appearances are deceptive- right. Go for this if you have read the first part.