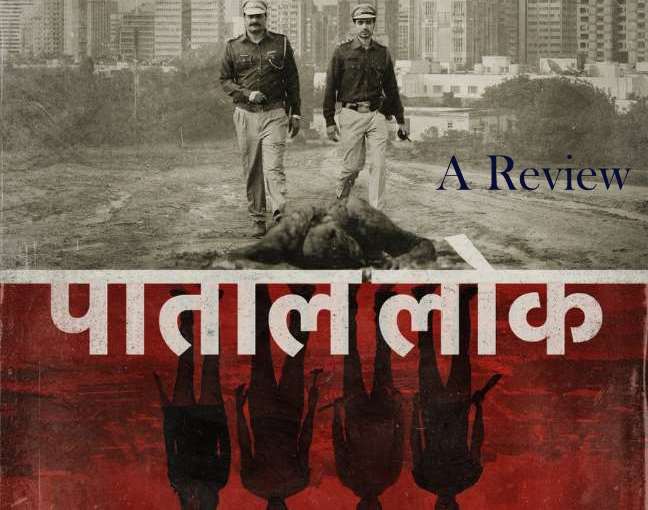 The fabric of our society is stained with bigotry, political hatred and deceit. Even though multiple attempts have been made to clear the fabric, the deep-rooted beliefs and the power-hungry nature of people often get the better of them and push them towards the abyss created by the seven sins. Depending upon the actions of man, the society has now been divided into three realms- Swarg Lok (which comprises of the elitist people- the rich and the most powerful), Dharti Lok (which comprises of the Middle-class people who spend their lives earning money for their family and sacrificing the pleasures) and the Pataal Lok(which comprises of the lower-caste people who do dirty things to survive). Pataal Lok, the new web series directed by Avinash Arun and Prosit Roy, highlights the hypocritical facade that people adorn and mocks the efforts of the one who assume that they can fight a lone battle against these boss men.

Set in Delhi, the story of Pataal Lok uses its characters as metaphors. Hathi Ram Chaudhary is a vociferous inspector who lives a meaningless life until a high-profile case lands in his kitty. The Delhi Police nab four assassins who are charged with ‘plan to murder’ and are arrested. The show is about the motive behind this attempt to murder. While Sanjeev Mehra (Neeraj Kabi), a top-notch journalist, is identified as the target of the murder, the viewers still struggle to find out the executioner of the master plan. Layer by layer the backstories of individual characters unveil and a potpourri of cruel intentions is unearthed. We see Hathi Ram Chaudhary representing the simmering yet wilful middle-class man who has a caring wife but struggles to bond well with his son. He desperately waits for that moment of fame that would help him prove his worth before his son. This high-profile case is his only hope and thus, he puts in his blood, sweat and tears (quite literally) to uncover the truth. Sadly, in the process, he realizes that he has lost himself. Supporting him as a sidekick is his subordinate Imran Ansari, a ‘Muslim’ policeman who aspires to become an IAS officer. The treatment meted out to Ansari at every turn of his life, by people like you and me, reminds us how deeply social stratification is rooted in our minds.

As Hathi Ram tries his best to gather clues and evidence against the accused, the twists and setbacks greet him at every nook and corner. His boss, the Station House Officer, Virk, (Anurag Arora) and DCP Bhagat set a clear example of the flow of power and money in the Indian Police system. As the series progresses, you will be exposed to the background of the four assassins and also the brutal reality of the people who still believe in patriarchy, misogyny, prostitution and male transgression. Vishal Tyagi (Abhishek Banerjee) is identified as a serial killer from Chitrakoot, who, in the act of revenge, used a hammer to kill three kids in his school. This was followed by more murders and him rising to fame by the name of ‘Hathoda Tyagi’. Tope Singh is identified as the spoilt and impulsive brat from Punjab who has had a troubled childhood owing to his lower caste. Kumar M is a Muslim from Chandni Chowk who doesn’t want to admit that he is a Muslim because of the public lynching of his brother who belonged to the same caste. Lastly, there is Mary Lyngdoh or “Cheeni” who pretends to be a woman and tries to earn money doing the wrong things so that he can marry his boyfriend. Cheeni, very subtly, draws in viewers’ sympathy because of his circumstances. He is sexually abused by a rickshaw puller just because he likes dressing as a woman.

When Hathi Ram uncovers the truth of these four assassins, he goes bonkers because there seems to be no connection in their stories. However, his gut feeling urges him to pursue the case even when he is suspended and the case is transferred to the CBI. The premise of the show then changes to Chitrakoot where stories are kept under the wraps. As Hathi Ram and Ansari team up to expose the source of all the chaos, they soon realize the depth of the labyrinth in which they have been trapped. Several names come up, several witnesses appear and then ensues a chase for the truth.

Pataal Lok deftly portrays the misery of the people who can go to any lengths to eke out a living for themselves. It shows us how the rich and the powerful always have a winning card up their sleeve. These people use the residents of Pataal Lok as pawns and sacrifice them when they are no longer needed. Through Sanjeev Mehra, the writers are able to introduce us to the people who utilize every opportunity thrown at them to make name and fame. Sanjeev uses the chance of being ‘marked’ by the killers to get back in the game. At the same time, we are introduced to Dolly, Sanjeev’s wife, who bears the brunt of her husband’s ignorance. There is a mythological angle to the show as well. With the generic references to Lord Ram and Lord Brahma, the show doesn’t lose the plot at any instant.

At one instance, DCP bhagat says that we all believe that the system is rotten. But, in reality, the system is a well-oiled machine that is run by its men. If a new man comes, he is taught to fit in. If he cannot, he is replaced. That’s how it has always been. These words, in fact, are true. The show’s USP is its cast. Each actor delivers an excellent performance. Right from Jaydeep Alhawat, Iskwas Singh, Neeraj Kabi to Gul Panag, Abhishek Banerjee and Jagjeet Sandhu- all of them are fabulous. The layered writing and realistic setting add to the overall impact of the show. Pataal Lok is a heavy show, for each episode opens up a new turn for the viewers. By the time we reach the penultimate episode, we find ourselves standing at a juncture from where the possibilities are endless. The plot twists catch you off guard and that’s another reason to binge-watch this show. You are going to love Jaydeep Alhawat with his genuine eyes and outspoken dialogues. There could be no one better for this role than him. At the same time, Abhishek Banerjee’s monotone expression and the demonic look in his eyes are sure to send a chill down your spine.

Overall, this show proves that the incredibly talented writers are out there observing the system and society. It is because of these writers that the viewers are now able to enjoy meaningful content. Kudos to the team of Pataal Lok for bringing forth the truth of political agendas, greed and thirst for money and power. This show deserves to be watched.