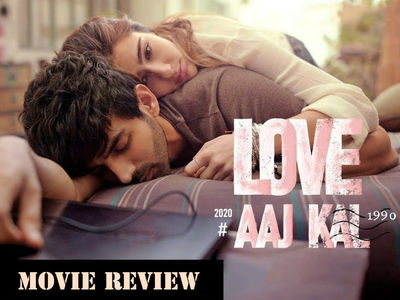 After Sara Ali Khan admitted before Karan Johar that Kartik Aryan is her crush, the paparazzi went crazy. The media didn’t miss any opportunity to click photographs of these two actors together and spread rumours about their relationship. While we still couldn’t understand the status of their relationship, the one who grabbed this chance was Imtiaz Ali who offered these actors a movie together. Jumping the bandwagon, they joined the team of Love Aaj Kal and here we have before us one of the most anticipated movies of the year playing in the theatres now.

Receiving more negative than positive reviews, Love Aaj Kal seems to be struggling at the box office. But after watching this movie, I can say one thing for sure that this movie is not everyone’s cup of tea. It is true that this movie doesn’t offer 100% entertainment. The reason is not a flawed storyline but a disparate approach that Imtiaz Ali has towards understanding the essence of love!

To begin with, the title of the movie came into the news because of not having a suffix ‘2’. In a recent interview, Sara made it quite clear that the title of the movie makes complete sense because what is ‘Aaj’ for us today, might not remain ‘aaj’ for others tomorrow. Hence, the title doesn’t have ‘2’. Well, the public turned a deaf ear to all the explanation, for this was an apt meme that could trend all day.

Love Aaj Kal has been in limelight from even before it released. While some are nitpicking the flaws and ignoring the crux of the plot, there are some who have given an unbiased opinion about this film. This article is not only a movie review but it also aims to explain how Imtiaz Ali’s movies are different from the rest of the mushy love tales.

What is the story?

Love Aaj Kal oscillates between 1990 and 2020. A lot has changed in a decade. Youngsters have become more fickle-minded yet pragmatic, they prioritize ambition over a relationship and they like doing what they love. The story begins with a sassy and goal-oriented Zoe who knows that ambition is her priority. But as soon as Veer, a software engineer, who prioritizes solid (strong) relationships over ambition, enters Zoe’s life, things turn topsy-turvy. The heart gives in and the mind refuses to accept. The movie’s theme is to highlight the mental and emotional pathos with the young generation that doesn’t want to compromise and is struggling in the whirlpool of broken bonds.

Matching up with the old movie with the same name, the story has another character- Raj (Randeep Hooda) who plays the role of a narrator in this film. He retells his story of love, sacrifice, betrayal and loss- with the intention of bringing Zoe and Veer together.

Sounds simple enough, isn’t it? Well, where the audience would have expected a lot of intimate scenes between ‘Sartik’ depicting their delectable chemistry, they were in for a surprise because the movie has a lot more realism than ‘reelism’!

What is in store for the viewers?
Just like any other Imtiaz Ali’s movie, Love Aaj Kal, too, is about self-exploration and psychological dilemma in youngsters. Knowing that he is fascinated by the redemptive and transformative power of true love, one can expect this movie to be based on the oddity of love. This makes it obvious that the movie would have sequences that would aim to preach and make the viewers realize. But that’s not what the promotions showed- giving the movie a weak opening at the box office.

The Good
There is no doubt that the director clearly understands what he has in mind and thus, the difference in the love stories set in two different timelines is visible. While the one that is set in the 1990s focuses more on how love was more about being together and cherishing the touch/ caress, the millennial love story is more about casual flings, hook-ups and frequent sex. What makes this depiction near-about perfect is the flawless acting by Aarushi Sharma and Randeep Hooda. Sadly, they are not the main cast.

Unlike what most of the reviewers have said, I felt that Sara as Zoe easily passes the muster. But as for Veer, his same expression throughout the film matches neither with Zoe’s nor Leena’s energy.

Another positive point about the film is that it has a logical explanation for every dialogue that is being said. Kartik’s desperate need for a partner who is completely there in the relationship is justified because he bears the brunt of his parent’s differences. Sara’s insecurities are a result of her overbearing mother who imposes her fears on her daughter because she had a broken marriage. When it comes to identifying the themes and addressing them, we can see that some of the themes have been explored and executed beautifully while some have been just touched upon. The conflict that every girl faces when it is time for her to get married and give up her career is something that we all are still caught up in! Sara beautifully brings forth the dogmas associated with marriage and career. Her fighting spirit and frequent outbursts show how frustrated she is with her professional as well as personal life.

The music is new and fresh. Only one of the songs- Haan Main Galat- borrows the hook tune from the original version of Twist. Other than this, all other songs are heart-rendering and melodious.

The Bad
The movie fails to convince the audience of the suffering of the characters. Zoe’s constant battle between career and love never seems to take the right path. One might be left wondering how affinity towards Veer might hamper Zoe’s career considering the fact that the former is shown to be supportive and caring. Another drawback in the film is its long-drawn-out pace and unexplored depth of Veer’s character. The desperate attempt to show emotional turbulence in the mind of the female lead leads to a miserable outcome because of the superfluous closeups. Sadly, the story is not conclusive. Even in the end, the union of Veer and Zoe feels interim, for Zoe doesn’t seem confident in her choice of action.

While most of Imtiaz Ali fans know how his affinity towards the offbeat concepts often leads to a misplaced storyline, they also know that his movies are more than just entertainment. These movies offer an insight within the self. They tell stories of people who are just like you and me and are suffering internally at the hands of heart and the mind.

Love Aaj Kal represents the stark reality of the millennial generation and their approach towards love. It showcases the fragility of relationships and the oblivion that people prefer living in. If one has the patience to sit through monologues and dramatic scenes that preach as well as serve as an allegory, this movie will be a good choice.