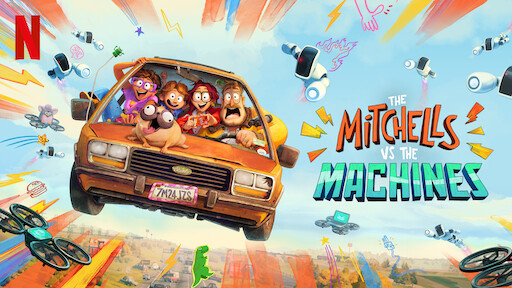 Netflix’s new animated movie ‘The Mitchells vs. the Machines’ is a futuristic peep into the delicate fabric of family dynamics that is soon inching towards being lost in limbo. With the advent of new technology and the dependence on phones, the machine apocalypse is no longer a hypothetical concept. Hence, this animated movie, through the medium of humour and satire, mocks the current generation for being so ignorant and apathetic about losing connections. The Mitchells vs. the Machines is based on how a normal (read weird) family overcomes their flaws or rather accepts their flaws to turn the tide in their favour when met with an army of robots that want to capture the planet and send away all the humans.

The film begins with Katie, a creative teenager who finds herself as a fish out of the water, for her family doesn’t understand her desire to pursue filmmaking. She is good, really good. But her father, Rick, is too scared to let his little bird fly in a direction that doesn’t promise success. Katie’s younger brother, Aaron, is equally a black sheep because of his inclination towards dinosaurs. He can talk about them incessantly. Hence, the siblings understand each other better than their parents do. As the movie progresses, we learn that Katie successfully clears the entrance for a film making school and is all set to meet a bunch of people that are like her. But odds turn against her when the machine apocalypse happens and the Mitchells are the only ones left to save the face of the earth.

With their flawed family dynamics, a bickering father-daughter duo, a slothful dog and a imaginative plan, this family embarks on an inevitable journey that promises a lot of laughter, a lot of learning and a lot of fun. The movie throws light on some of the major problems that come in the way of happy living like too much screen time, the obsessive desire to fit in, the fear of letting the children dream and the aftermath of depending too much on technology. At the same time, it also shows how beautifully a father and a daughter connect over something as dangerous as saving the world. Right from Katie’s implausible plan to Rick’s secret weapon and Linda’s hidden power, everything about the movie is excellent. The animation is so good that it might make your mind do a double take!

This definitely finds a spot in my top 5 animated movies that can be watched during the lockdown. Watch it to enjoy!