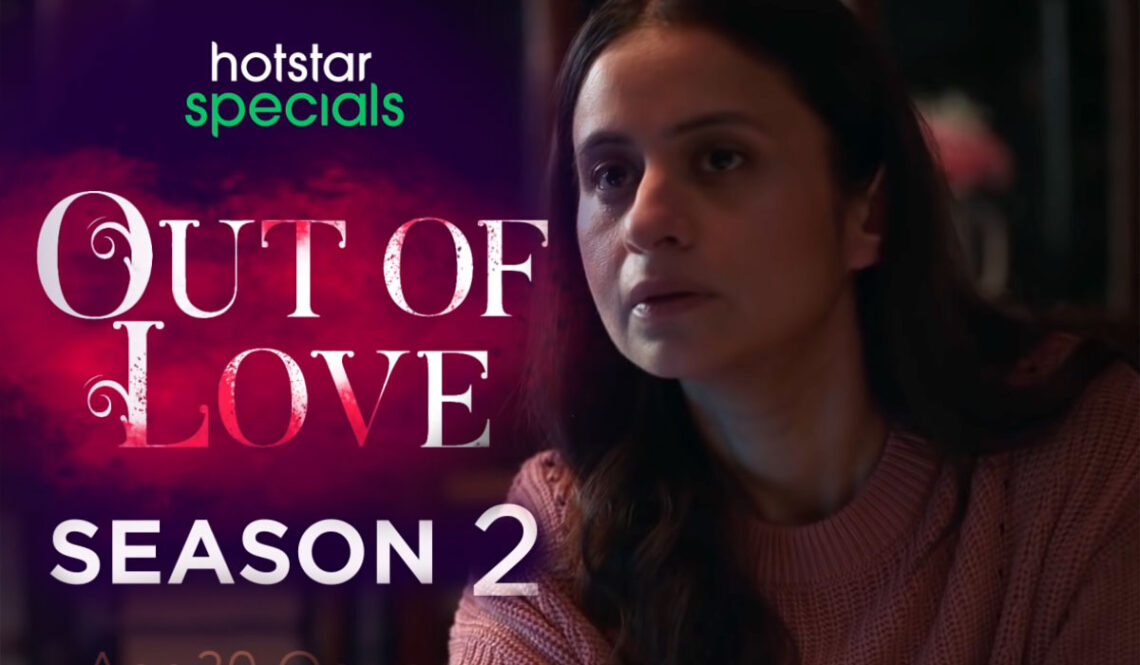 It came as such a relief when I saw the trailer of Out of Love (season 2). With no more interesting series/ movies to watch on any of the OTT platforms, the release of OOL was a balm to my soul. With the lead pair reappearing in the second season, hopes were set high and entertainment was promised. Rasika Duggal as Meera and Purab Kohli as Akarsh are fabulous and their chemistry is something that forms the USP of the show. The second season of OOL follows the story post the divorce of the lead pair. While Meera was busy raising her beloved son singlehandedly, Akarsh paved his way to success and decided to move back to Coonoor and reconnect with his lost friends, family and surroundings. This stirs Meera’s still life and causes a rift between her and her son. The second season opens a can of worms for Meera and Akarsh as they deliberate over their failed marriage and failed parenting!

The first episode presents a stunning opening scene when Abhi, Meera’s son, receives an invitation to Akarsh’s and Alia’s homecoming party. While Abhi is a little excited about his father moving back to the town, Meera’s intuitive mind can already predict the consequences of this move. The fear of losing her son overpowers her reasoning and she asks Abhi to attend the party as Akarsh is his father after all. Tables are turned and things out of control post the celebration where Meera ends up creating a scene and Abhi’s mind invites anxiety as its permanent residence. The following episodes literally show the extent to which Meera can go as a mother to be with her son. While the show highlights the revengeful twist in a broken marriage, it also focuses on the will to win a lost battle (both for Meera and Akarsh) and the unconditional love the mothers have for their children.

The characters are the same, the setting is the same yet the newfound energy with which Meera comes across as a phoenix is praiseworthy. For that matter, even Akarsh is fabulous in a grey shade. The streaks of grey amidst the black exemplify his wisdom and age for sure but they also add weight to his character. Yet again, the story is backed by the betrayal of friends, choosing sides based on personal gains and relationships that become fragile if any one of the partners considers infidelity as a one-time mistake. In one of the scenes, Alia says that Akarsh hates Meera more than he loves her and it makes complete sense. Witty dialogues every now and then aid the story in showcasing how the human mind loses its reasoning power owing to overpowering emotions like hate and vengeance.

However, the slow-burn and the subtlety with the first season left a lasting impact are missing in this season. Events happen more by choice than by accident. Whether it is Meera’s drama at Akarsh’s party or Meera’s sudden inclination towards her new patient, Rohan- these events do not make sense. They add to the mess only contributing to the unforeseen drama. Yet this time, the spotlight is on Meera alone, for she doesn’t rely on anyone other than herself.

Overall, Out of Love (Season 2) is definitely worth a try because of its taut plot and crisp scriptwriting. Even though the story doesn’t pan around much that can happen, it does force the viewers to do a double-take. Go for it!