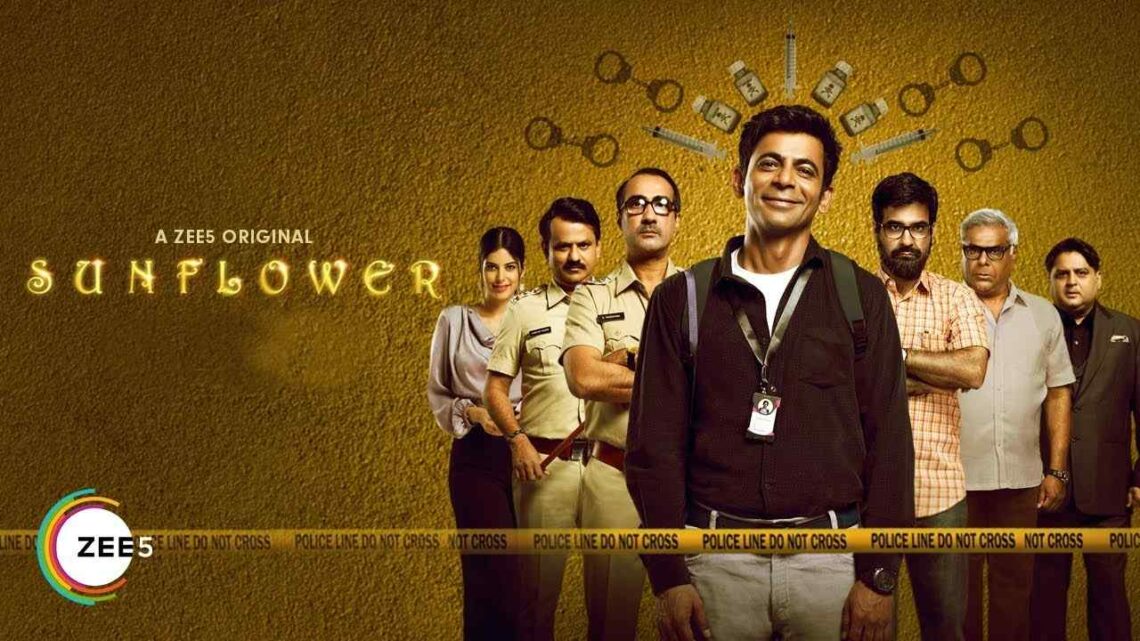 One of the least explored genres in Hindi Cinema is dark comedy. Even though there have been marvellous movies like Kalakandi, Andhadhun and Udta Punjab, such movies seldom receive full stars because of their complexity and the audience’s failure to gauge what to put their bets on. Zee5’s new web series, Sunflower, falls in the same genre and for me, it passes the muster with ease. Back tracing the cause and effect of a murder that takes place in a gated society, the plotting, as well as execution of this series, is well-crafted. The title itself sounds so ironic and can invite multiple perspectives. Sunflower is a flower that’s supposed to make someone’s day happy. Yet the opening scene itself makes one of the residents meet a sticky end! Sunflowers are also indicative of pollination- transfer of pollens. In the series, the suspicion keeps transferring from one suspect to another and the viewers are left clueless in the end! That way, the narrative is crisp and entertaining too.

Sunflower is the name of a gated society of ‘reputed and culturally- inclined’ families. In the opening scene, one of the residents, Raj Kapoor, is murdered. Within minutes, the identity of the murderer is also revealed to the viewers. Then what’s there for us to watch, you might ask? While the police get down to the dirty business of interrogation and inspection, it is intriguing to watch each character unfold his/her true layers. The viewers are left in a split, for they cannot convince their hearts nor mind that another character can possibly be the murderer. The writers have beautifully woven a web of confusion and mystery and they successfully pull the viewers in too. While the needle of doubt moves from the next-door neighbours to an eccentric man in his mid-thirties, the viewers are introduced to several other characters who directly or indirectly had come into contact with Raj Kapoor.

As the investigation progresses, the loopholes in the direction become evident. The first drawback that the viewers encounter is the length of each episode that seems to drag. The inclusion of several scenarios like Sonu’s (Sunil Grover’s) eagerness to help a stubby old man and the introduction to a new entrant in the society who believes ‘riyaz is the solution to her big dream of becoming a singer seemed unnecessary. The storytellers’ multi-faceted approach to touch upon the themes of LGBTQ and the stereotypes revolving around gender, religion, colour, single parents, divorce and values was half-cooked because they weren’t explored in any depth. The focus of the show was still the murder and that’s why these smaller distractions failed to draw any attention.

However, the performances were top-notch. Right from Ashish Vidyarthi as the ‘khadoos uncle who judges everyone who enters the society’ to Sonu, who is a victim of OCD and lands himself in a tough spot every time he tries to do something good, each character did justice to their part. The sequences were reflective and hilarious, respectively. Ranvir Shorey as the cop seemed lethargic but that’s what his character demanded. Girish Kulkarni as the sub-inspector was equally good. He has the gift of the gab and his crispy yet sarcastic, humour-coated dialogues provide the necessary comic relief. I really applaud the writers for being able to squeeze in so much content amidst backtracing a murder. This is a risky territory but they did their research before taking the plunge!

Overall, Sunflower is definitely worth your time, for it has unwavering focus and quirky characters that make this show different from what’s already available on the OTT platforms. The cliffhanger is something to look forward to. For some, it might be bothersome but it definitely worked well for me.