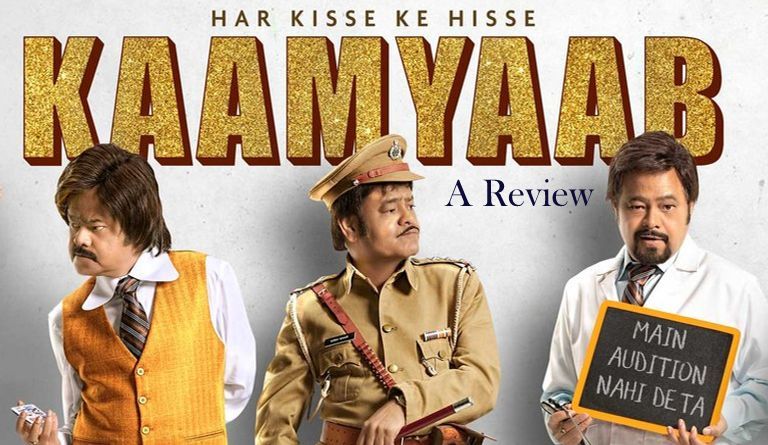 If you have watched Kaamyaab, this dialogue would have touched your heart for sure. The new movie by Red Chillies Entertainment, Kaamyaab, is a tribute to all the sidekicks in Bollywood. The movie extolls the efforts of these obscure heroes who help the protagonist grab all the limelight by adding value to their scenes. It lauds the umpteen hours that these unsung heroes spend on the sets waiting for that millisecond of fame and even then they do not miss any chance of rejoicing their moment of glory. The movie, time and again, asks a rhetorical question about the biased attention given to the side characters by using dialogues that highlight their versatility but at the same time, undermine their prowess to be cast in the main role.

The film opens with Sudheer’s (Sanjay Mishra) interview in his house. The irony in the speech of the interviewer makes it quite evident that the movie has something deep to offer. While the interviewer mentions how Sudheer lives a happy life in his happy place, the camera pans over the unwashed dishes and the empty bottles of alcohol. The film traces Sudheer’s journey of finding the light at the end of the dark tunnel, trying to be back in the game, even if it is for the last time. When Sudheer realizes that IMDB keeps a track of all the movies and that he ended his career at 499, he has his light bulb moment and decides to search for that near-perfect role (of a sidekick) that would be remembered by peoples in years to come. With little or no support from his family, he strives to listen to his calling and pursue something that makes him happy.

Kaamyaab is a panegyric about every artist who strives to prove to the world that his choice of career is legitimate. It portrays the struggle that comes along when the people you love fail to understand your reasons. It shows how the people from the same field seem more empathetic because they, too, sail in the same boat as yours. The movie throws light on the competitive world that refuses to cut you the slack and instead makes you hang in there by fingernails. Irrespective of the age or experience, the competition is immense and so is the struggle. Even the last scene of the movie is so ironical! While the audience is asked to wait for the chief guest, who is a superstar, Sudheer entices the audience by performing the bits and pieces of his roles. And then reality strikes, the superstar enters the auditorium and yet again Sudheer misses his moment of fame. Only his family realizes his real worth and witnesses him retreat into his reclusive world once again. With no one to appreciate his effort nor his acting skills, Sudheer sets an example of a determined actor who doesn’t leave any stone unturned in paving his path to success. The only problem here is that success is stolen by the ones who come under the category of ‘stars’.

Kaamyaab is one of the finest creations of Hardik Mehta who is known to be a keen observer and doesn’t waste any chance in bringing out the reality of the reel world. The impactful dialogues by Radhika Anand and the powerful screenplay are some of the things to look out for. In fact, the scene in which Sudheer hallucinates and sees all the people he knows cornering him gives you a foreboding feeling. That feeling is so intense that it might even well-up your eyes!

The cast of Kaamyaab is perfect. Deepak Dobriyal as Gulati is honest and does justice to his character. Isha Talwar as the modern girl who settles in Mumbai in the hope of chasing her dreams is fabulous. Her natural dialogue delivery and near-perfect connection with Sudheer add a lot of substance in the story. Sudheer’s daughter, Bhaavna, played by Sarika Singh, delivers a genuine performance. Avtar Gill, Shibu, Viju Khote, Birbal, Lilliput, Ramesh Goyal, Manmauji, Guddi Maruti, Anil Nagrath and Bachchan Pacheria-all of them act like a scaffold that gives this movie a structure and essence.

This review will be incomplete without a mention of Sanjay Mishra who is absolutely himself in the movie. His glum look, his fancy shirts and the black wig leave a lasting impression on your mind. He is so absorbed in his art that it doesn’t matter to him what kind of role he did in the past. All that matters is that he did them well. He offers genuine moments of sympathy when he is disrespected by a young man, fooled by the casting director and made fun of by the cameraman. I couldn’t help but wait for him to say ‘Just chill’ like he said in All the Best. But this movie was not about everything becoming perfect in the end. It was about finding the silver lining in the dark cloud. It is about perseverance and patience.

After watching this movie on Netflix, I felt like a hypocrite who claims that such movies have the calibre to tempt the audience, but when it comes to watching such movies in the theatre, I choose otherwise. I have felt like this on several other occasions. But to quench my guilt, I have stopped watching big-budget films. Instead, I try to watch off-beat films like Mulk, Game Over and Section 375 in the theatre. I hope Kaamyaab is indeed ‘kaamyaab’ in making the audience realize that the side characters, too, deserve attention and love, for their effort cannot be just ignored.

Read the review of PANCHAYAT here.