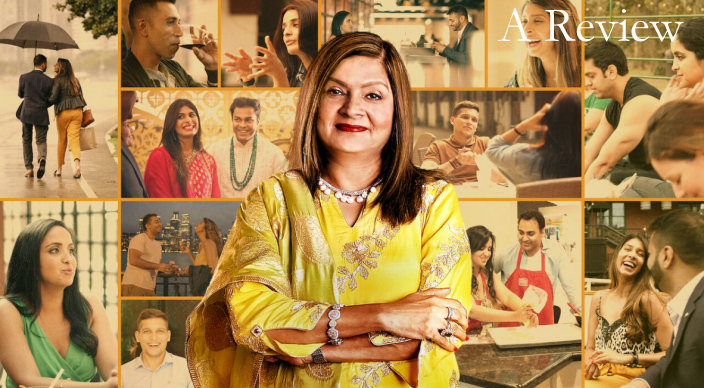 Sima Taparia from Mumbai says that ‘marriages have become like biscuits; they are breaking easily’. Well, I have a question. If marriages are becoming like biscuits, why do you need to put pressure on them so that they break? The new trending show on Netflix, Indian Matchmaking, has become the talk of the town with its cringe-worthy plotline and too-bad-that-it’s-good content. The human mind is a strange organ; it finds pleasure not in thinking about new ways to conquer a problem but in gossiping and processing the information gathered via eavesdropping.

The new reality show, Indian Matchmaking, is regressive and orthodox, for it highlights that section of the society that still believes that matches are made in heaven and the matchmakers are the messengers of God. The show introduces us to Ms Sima Taparia from Mumbai, which she reiterates every time she meets a new client. Ostensibly, she is the topmost matchmaker in Mumbai and deals with NRIs too. While most of the clients come across as obstinate, too privileged and self-centred, Sima aunty is no less. She is quite vocal in terms of calling her clients choosy and egoistic. Every biodata for her is a tough cookie to crack. But still, she strives to find the best match. How tiresome must her job be, for she can often be seen travelling to distant lands! She is so blunt and confident that she begins the small talk by asking the client about the qualities they seek in their future life partner. While some of those criteria are palatable (good sense of humour, respectful, passionate, supportive and cultured), others are just outrageous. Some women demand their potential matches to know that Bolivia has salt flats or be taller than 5’9”. Men, too, are not far behind. While most of them want their wife to attractive, fair-skinned and beautiful, there are others who want their wives to be like their mother! How foolish is that!

The show is not entirely bad. Some of the characters are genuine and quite relatable. Say, Nadia, who is Guyanese by origin and isn’t able to find a match because of her ancestry. She comes across as a genial and affable person but gets hurt again and again. Then there is Vyasar, who has a diabolical past and fears to denounce his fears before his life partner. Their circumstances evoke empathy and sympathy. But the unwanted cliffhanger creates a katzenjammer. We aren’t told what happens to Vyasar when he takes a leap of faith. We aren’t told about Nadia’s ‘happily ever after’. We aren’t told about many things.

The show is comfortably-paced. It is binge-worthy because of the crisp editing. Even though you know that watching Indian Matchmaking is like looking at the mirror and laughing at your own miserable circumstance, it seems fun. That is ironical and sad. The stereotypes that originate from colourism, casteism, sexism, misogyny and racism are perpetuated in our society. They aren’t new. The problem, however, lies in the orthodox thinking of the majority who refuse to allow their mind to breathe fresh air. You have Akshay and his mother who live in a parallel world where practical thinking has ceased to exist. While Akshay wishes for a bride who is ‘exactly like his mother’, his mother wishes for a daughter-in-law who is not only flexible but also keen on serving meals to Akshay. Then there is Aparna who is as stubborn as a mule. It is funny how she calls herself independent but the reins of her life are in her mother’s hands. Her mother calls one of the candidates ‘a loser’ and that just puts the audience in a black mood, for no one should judge anyone based on their income or anything for that matter just based on the first meeting. Hypocritical and extravagant, these singles on the lookout for partners only represent a particular section of the society. The Indian matchmaking is not at all only about how Sima Taparia portrays it to be. It is much more than that. Now, parents have become open-minded. The expectations are not that high and adjustment is something that tags along as an unsaid rule. Working women are acceptable and serving meals not their only job. Men are now looking for women with a good heart and a ravishing personality rather than just keeping their eyes on the stalk for the slim, trim and the most beautiful!

This show might be enjoyable to watch yet I am afraid that more people should not begin relying on a matchmaker to get married. In the entire first season, we don’t get any idea about the kind of income Ms Sima makes but her travelling frequency and the destinations do say a lot more. Ms Sima’s belief in the alignment of stars, predictions based on face reading and matching horoscope definitely put me in a dilemma, for her actions prove that she is an unthinking conformist and that she is really far away from practical reality. Watching this show also made me realize the consequences of my actions. As Indians, we like to view our life with rose-tinted glasses but Indian Matchmaking exposed me to the crude reality. Even though I felt surprised, repulsed, angry and demotivated after watching the first few episodes, I binged-watched it and completed the first season, thereby paving the path for a second season. I also understood that as human, we find immense pleasure in knowing what is happening in someone else’s life. The inconclusive ending for each client further raises eyebrows at the credibility of Ms Sima.

Indian Weddings have become a major industry now and the matchmakers make the most money out of it. It was surprising to know that Ms Sima Taparia works in close collaboration with another matchmaker, Ms Geeta, the face reader, the horoscope reader, the life coach and the pandit. Aghast at the rotation of monetary benefits, I wondered how deeply we all are sucked into the unfathomable chasm of ‘weddings’. With no respite from the unrealistic expectations in sight, this show made me realize that the concept of marrying the man/woman of your dreams is a hoax. No one is perfect. Rather than basing your criteria on something so superficial, life would be easier if beauty is sought within the soul.

Watch at your own risk! The misogynistic point of views might just blow away your mind!